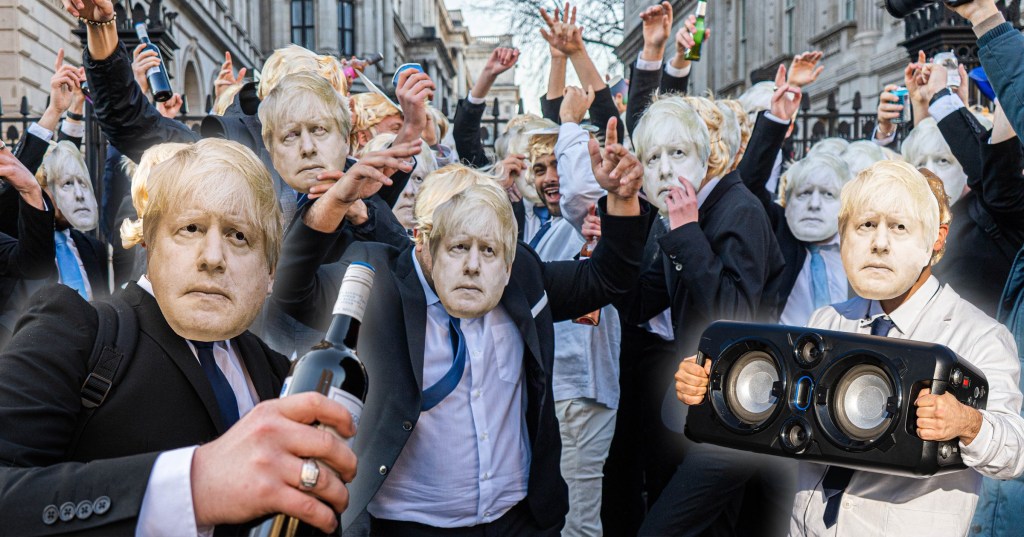 The ‘partiers’ were mocking Boris Johnson’s apology for the garden party (Picture: Rex)

Dozens of ‘Boris Johnsons’ partied outside Downing Street in a fun poke at the several parties the Government is accused of holding despite Covid restrictions.

The Tories are facing a so-called partygate row after the Prime Minister himself apologised to the House of Commons for a bring your own booze garden party.

Mr Johnson has repeatedly insisted this event, held at a time when no more than two people were allowed to meet socially, was a ‘work event’.

This has caused fierce backlash for Mr Johnson and his ministers, culminating in a rather untraditional protest of sorts.

Some had tied Union Jack flags around their bodies while others were heard chanting ‘my name is Boris’ and ‘this is a work event’.

It is believed the event was organised by the YouTuber ‘JaackMaate’, who shared pictures of the event on Twitter with the caption: ‘We hired 100 Boris Johnson’s and threw a party outside Downing Street…’

Some people waved Union Jack flags in the air while others wrapped the flag around their bodies Picture: Rex)

Many of the men were holding beer and wine (Picture: Rex)

Several politicians have called for Mr Johnson to step down over the party allegations as the public is fuming they had to suffer lockdowns and restrictions that seemingly went unobeyed by the people who made them.

It comes after Number 10 apologised to the Queen for holding two parties on April 16 – the day before Her Majesty sat alone at Prince Philip’s funeral.

The PM’s spokesman confirmed No 10 has said …read more

Google’s $600 Pixel 6 is the perfect phone for anyone who wants a big screen, premium cameras, and speedy performance for under $1,000