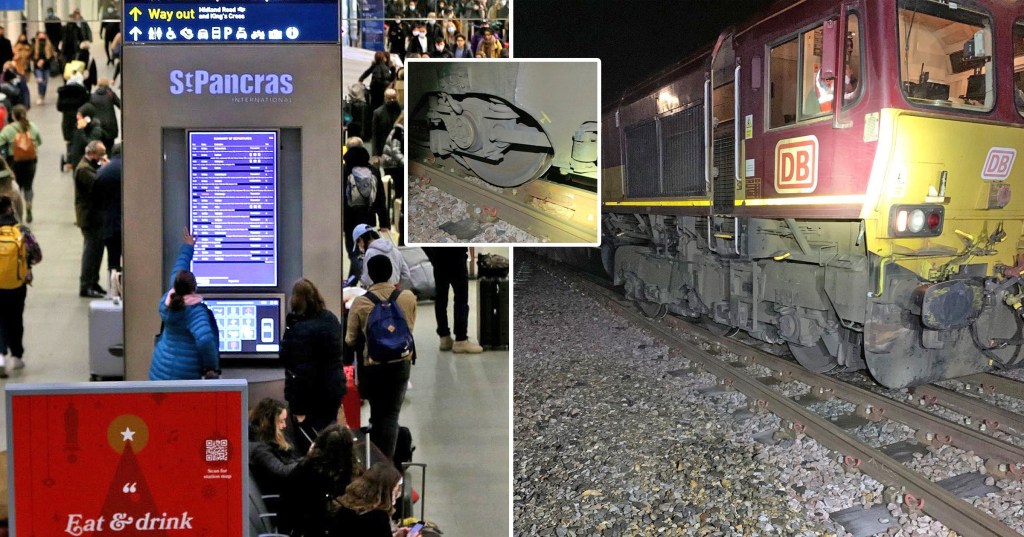 The large train’s wheel slipped off the track, blocking the way for passenger services behind (Picture: Getty/@NetworkRailSE)

Thousands of commuters were delayed this morning after a large freight train got stuck on the tracks.

Delays into London’s St Pancras station have continued throughout the morning because of the ‘low speed derailment’.

The locomotive got stuck at the Hoo Junction depot on the North Kent Line after its wheel slipped off the track before 5am this morning.

It meant other passenger services were stuck behind the immobile train for several hours and trains had to be rerouted while it was removed.

Thames Link and Southeastern Railway both reported delays to their services during the busiest time of the day.

Network Rail warned that operations to pull stuck trains off the lines ‘can prove tricky sometimes’ but managed to dislodge it after around four hours.

A spokesperson warned customers: ‘Please continue to check before you travel as there may still be some delays while we get back on track.’

It took Network Rail several hours to get the train back on the line and moving again (Picture: NetworkRailSE)

Southeastern issued similar advice: ‘We have been advised by Network Rail that the freight train has been re-railed and lines in both directions between Gravesend and Strood have been reopened.

‘Please continue to check your journey before travel.’

Thameslink was forced to scrap all services through Higham, Strood, Rochester, Chatham and Gillingham throughout the morning.

The operator warned on Twitter ‘it may take some time’ before services are fully back to normal today.