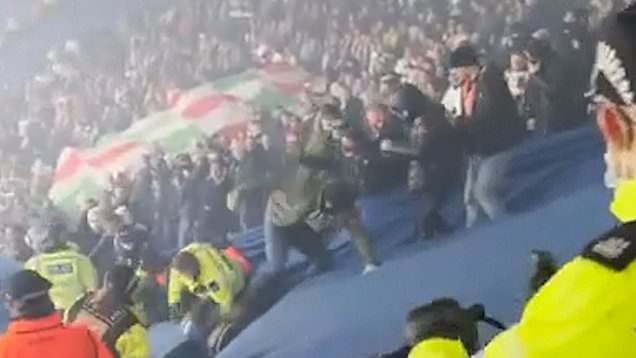 Football fans appeared to kick a police officer down the stairs during Leicester City’s Europa League match against Legia Warsaw.

A video showed Legia supporters attacking officers and stewards in the second half on Thursday night.

One fan appeared to kick a police officer in the back as he retreated down the steps at Leicester’s King Power Stadium.

A Foxes supporter said trouble kicked off when Polish Legia fans unfolded a giant banner and let off up to 30 flares.

‘Baton wielding police were battling with the sea of fans before riot police arrived,’ they told Leicester Mercury.

‘All eyes in the ground were on it – as the result was already beyond doubt.

‘Police dealt with it well, but it was unnerving to witness, though it was no fault of LCFC or their fans.’

A Legia Warsaw fan appeared to kick a police officer

After the game, Foxes boss  Brendan Rodgers commented on the violence, adding: ‘There seemed to be some trouble up in the far corner, so I didn’t see so much of it.

‘But obviously it went on for a period of time and it’s not something you want to see at a football game to be honest.

‘I haven’t seen or heard any details on it yet but hopefully no-one’s been injured.’

Patson Daka, James Maddison and Wilfred Ndidi struck in the first half to beat Legia Warsaw 3-1 and send Leicester top of Group C.

AP college football poll: Michigan rises to No. 2; Oklahoma State up to 5th