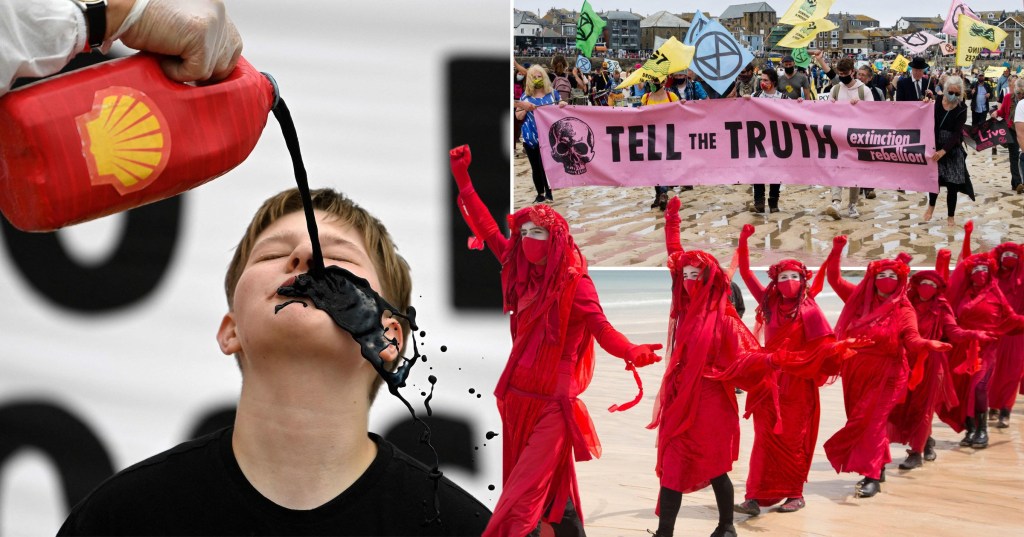 Activists protested over world leaders’ ‘failure to respect the global climate commitments they made in Paris in 2015’ (Picture: Getty Images/Rex Features)

The climate change group has planned several demonstrations in the run-up to and during the three-day conference.

Activists want to hold world leaders responsible for their ‘failure to respect the global climate commitments they made in Paris in 2015’.

Today saw protesters gather in St Ives, where people gave speeches in the town-centre before marching through the rest of the sea-side location and blocking multiple roads.

More than 500 walked to the beat of a continuous drum chanting ‘act now’, ‘sound the alarm’ and ‘liars’.

Local Senara Hodges, 51, said she was ‘delighted’ the campaigners were protesting.

The filmmaker said: ‘It’s absolutely fantastic. They are not causing the disruption – the Government is with its lack of action.

‘We are severely disrupted by the G7. It’s a huge imposition on a very, very busy town during peak season. It feels like a typical lack of understanding of the impact.’

Activists dressed up in colourful robes to represent the different factions in Extinction Rebellion (Pictured: The Red Brigade) (Picture: AP)

Many were dressed in colourful robes, representing the different specialist factions in Extinction Rebellion, whilst others just wore the organisation’s symbol on regular clothes.

The group hope all their protests will ‘urge the leaders meeting at Carbis Bay to act immediately to address the Climate and Ecological Emergency’.

Ford has started shipping the 2021 Bronco. These are the 13 coolest features of the tough-as-nails off-roader. (F)