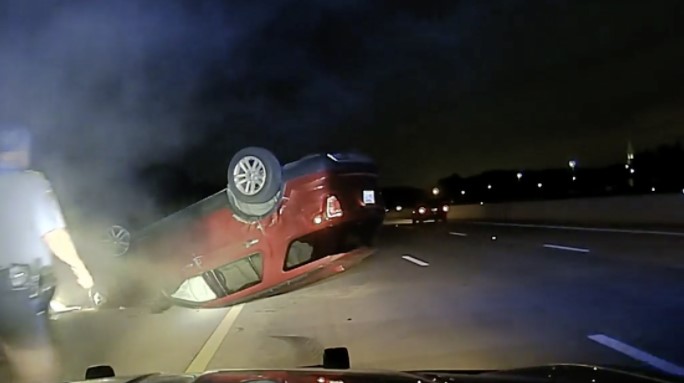 A woman in a lawsuit claims a police officer used a dangerous technique to get her to pull over, causing her vehicle to flip (Picture: YouTube)

A woman has sued the state police after accusing a police officer of using a dangerous technique to get her to pull over, that wound up causing her car to flip upside down while she was pregnant.

Nicole Harper, 38, claims she was driving home when Senior Cpl Rodney Dunn ‘willfully and wantonly engaged in extreme and outrageous conduct’ but ramming her car and inflicted ‘severe bodily injuries’ on her, according to her lawsuit obtained by Law & Crime.

The suit, filed in mid-May in Pulaski County Circuit Court in Arkansas, states that Dunn clocked her going 84 miles-per-hour in a 70 mph zone. Within seconds, Dunn turned his cop car lights on and Harper slowed down and drove into the right lane of the three-lane highway, Harper’s attorney said.

Harper was not able to pull over safely due to reduced shoulders on either side of the road, so she turned her hazard lights on and kept driving at about 60 mph looking for a good spot, the complaint states.

Video shows the moment that Dunn walked up to the flipped vehicle and knocked on the driver’s side window and asked if she could get out.

1 in 5 electric vehicle owners in California switched back to gas because charging their cars is a hassle, research shows

‘Because I didn’t feel like it was safe,’ Harper replied.

Insist on ‘opt-in’ policies when new products threaten our privacy

I had the poshest afternoon tea at London’s oldest hotel. Here’s what it was like, and how the very English tradition has changed post-COVID