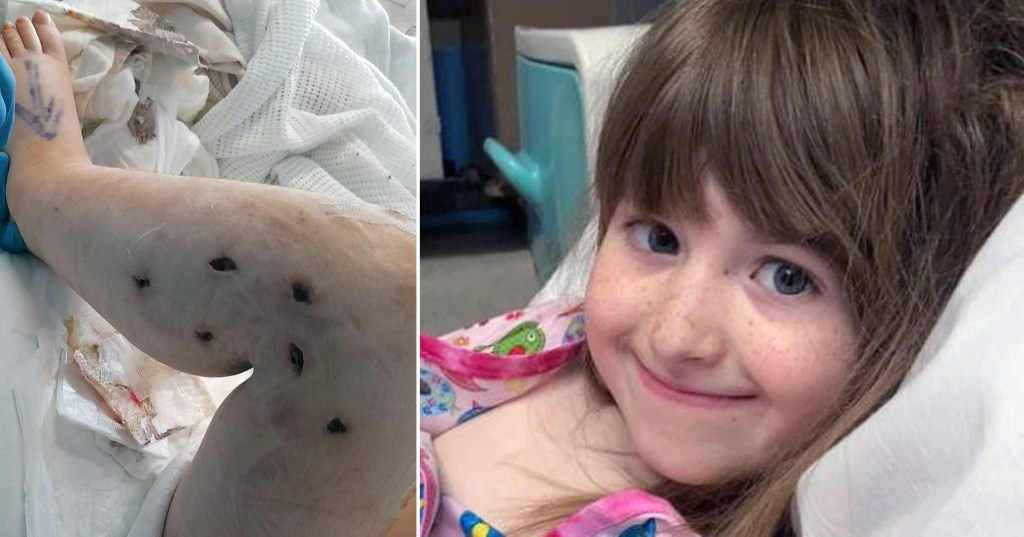 When seven-year-old Annabelle Newman came home with a three-millimetre thorn stuck in her leg, her mother simply removed it and thought nothing more of it.

But one week later, Charlene Kirby, 30, noticed the once-tiny scratch on her daughter’s knee had developed into a rash and was oozing puss.

Annabelle visited the GP twice and was given two rounds of antibiotics, but the infection failed to clear and her skin suddenly turned grey, leading to a trip to to the A&E.

Cut to seven operations later and Annabelle, from Pembrey, Wales, is lucky to have kept her leg from being amputated.

Mum Charlene said: ‘I never thought Annabelle would be at risk of losing a limb from a thorn.

‘She was fully dressed but it pierced through her uniform when she was playing in the forest at school.’

Annabelle was first taken to Glangwili Hospital on May 5, where an ultrasound found the infection had spread to her feet and up to near her groin.

She has since endured a staggering seven operations to remove flesh and clear abscesses, leaving her with 11 wounds.

Annabelle was first taken to hospital on May 5, when an ultrasound found the infection had spread to her feet and up to near her groin (Picture: Wessex News/Charlene Kirby)

Annabelle will be left with scars after surgeons made made 11 holes to try and swab and clear up the infection (Picture: Wessex News/Charlene Kirby)

Lara Trump urges Americans living near to the southern border to 'arm up, get guns' and prepare to 'take matters into their own hands' against migrants

Charlene added: ‘The last few weeks have been torture.

‘She has been in a lot of pain and unable to move her leg.’

Charlene and dad Oscar Newman, 30, have been taking it in turns to stay with their daughter in the hospital.

2 legal-tech companies just filed to go public. Here’s everything you need to know about Intapp and LegalZoom, and their plans for growth.