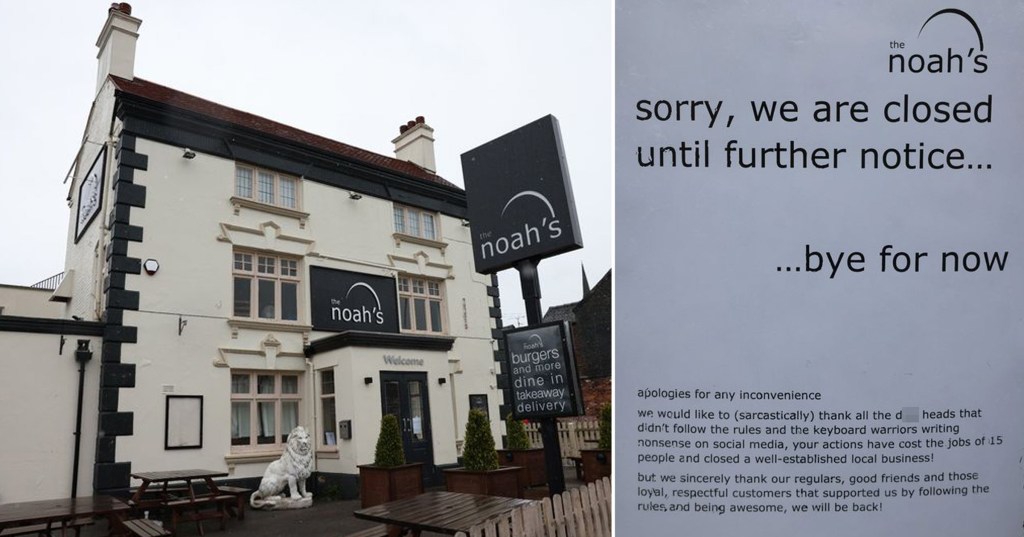 The Noah’s was forced to shut after people complained about its enforcement of coronavirus restrictions (Pictures: MEN Media)

A pub has lashed out at ‘rule-breaking d***heads’ and ‘keyboard warriors’ after it was shut because customers kept breaking coronavirus restrictions.

Like other hospitality venues, The Noah’s has had to go months without making any money during lockdown.

It was able to serve customers again from April 12 but this was short-lived because of ‘rule-breaking d***heads’.

Punters ‘think it’s okay to not wear a mask inside, don’t understand why more than six people on a table is an issue, and some even think they are exempt due to medical issues (yet don’t carry an inhaler)’, the pub claimed.

Locals complained on social media about ‘uncontrollable mayhem outside’, ‘crowds standing with drinks in their hands without masks’, ‘letting too many people into the beer garden’ and ‘people being served while standing’.

On top of this, a customer reported a ‘massive fight’ at the venue last weekend and it was forced to shut on Friday.

The pub, in Hartshill, Stoke-on-Trent, left a note on its front door saying: ‘Sorry, we are closed until further notice… bye, for now. We apologise for any inconvenience.

‘We would like to (sarcastically) thank all the “d***heads” that did not follow the rules and the keyboard warriors writing nonsense on social media. Your actions have cost the jobs of 15 people and closed a well-established local business.

‘But we sincerely thank our regulars, good friends and those loyal, respectful customers that have supported us following the rules and being awesome. We will be back.’

The Noah’s had tried to prevent customers from getting out of hand by closing earlier than their midnight licence allowed (Picture: MEN Media)

‘That Damn Michael Che’ makes you laugh a lot, squirm a little