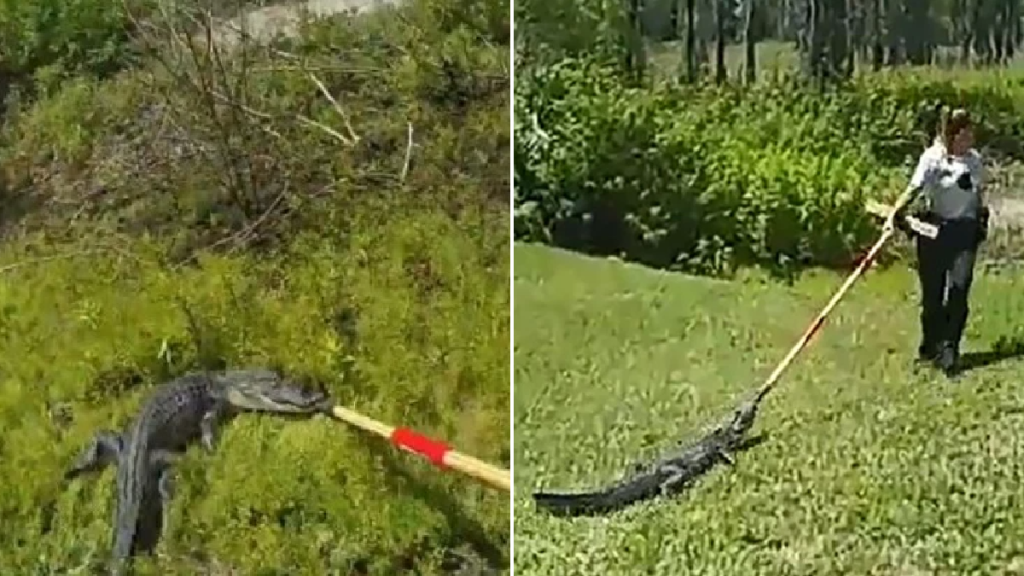 A sheriff’s deputy uses a broom to lure and drag an alligator back to a pond (Pictures: Hillsborough County Sheriff’s Office)

A female deputy saved homeowners – and an alligator that invaded their yard, by masterfully using a broom to guide it back to a pond. Deputy Wheaton and two others with the Hillsborough County Sheriff’s Office in Florida responded to a call about a gator underneath a car on Thursday.

The four-foot alligator wandered out of a pond and was sleeping under a car in a neighborhood in Tampa. The sheriff’s office shared a nearly minute-long video of Wheaton wrangling the reptile that was crawling around a grassy area outside a home.

#GOODNEWSSUNDAY: Deputy Wheaton saved another gator!!! ð On Thursday,
she responded to a call about a gator under a car. Fortunately, she was able to relocate the gator back to its pond, when it grabbed onto the broom and hitched a ride! Great work, District 1! #HCSOgns pic.twitter.com/pxFHKc72KP

Wheaton did the trick using a broom. She held on to the brush side and got the alligator to bite on to the other side of the stick. She then dragged it across the lawn and flung it toward the pond, then prodded it go back to its natural habitat.

‘Deputy Wheaton saved another gator!!!’ the sheriff’s department wrote in a tweet sharing the video of the episode on Sunday. ‘Fortunately, she was able to relocate the gator back to its pond, when it grabbed onto the broom and hitched a ride!’

She could be heard joking at the end of the video that the gnawed up broom would have to be replaced.

India is the first country to record 400,000 coronavirus cases in a single day