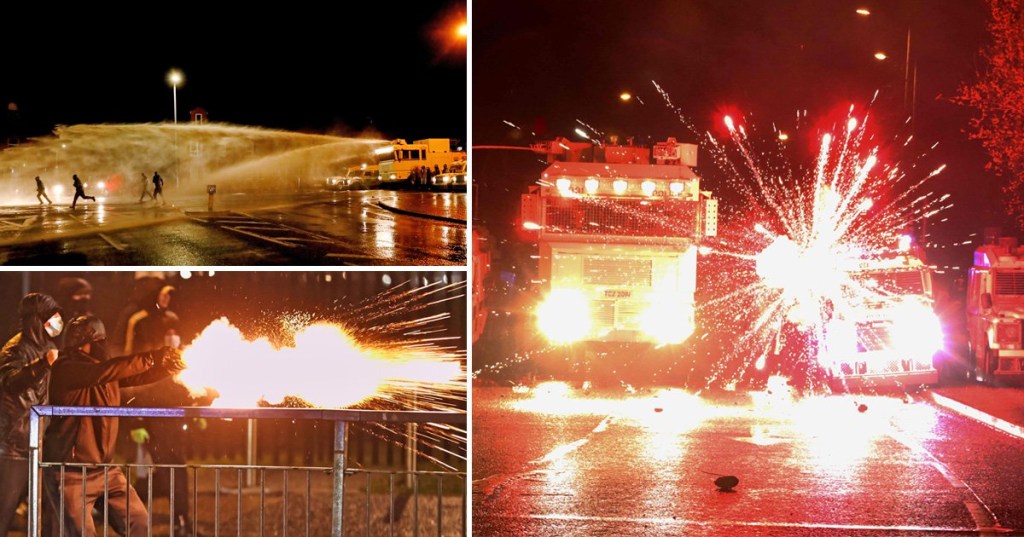 The unrest has been described as the worst in years (Picture: Reuters; PA; Getty)

Rioters were blasted with a water cannon by police as violence erupted on the streets of Belfast for the seventh night running.

The unrest in Northern Ireland has been described as the ‘worst in years’  with petrol bombs, fireworks and rocks thrown at officers on Thursday.

Fifty-five officers have so-far been injured in a week of clashes between nationalists and pro-British loyalists at the so-called ‘peace wall’ on Springfield Road.

Those involved last night were warned by police to ‘disperse immediately or the water cannon will be used’.

However, those present continued to fire missiles and after several warnings, the water cannon was deployed.

Some of those present jeered before fleeing as the water jet came closer.

Justice Minister Naomi Long issued a fresh call for calm after what she called ‘depressing and reckless’ scenes.

She tweeted: ‘More attacks on police, this time from nationalist youths. Utterly reckless and depressing to see more violence at interface areas tonight.

‘My heart goes out to those living in the area who are living with this fear and disturbance. This needs to stop now before lives are lost.’

There were also reports that police warned crowds ‘impact rounds will be fired’. The plastic bullets are not used as a means of crowd control in any part of the UK apart from Northern …read more

How to watch ‘Made for Love,’ the new HBO Max sci-fi series