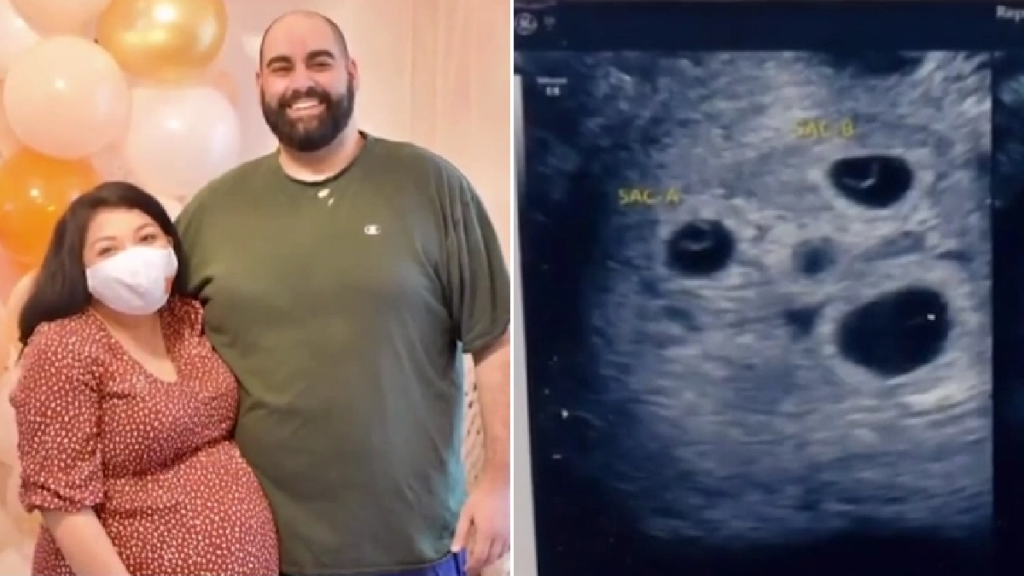 Maria Sawaged and her husband Joseph tried to get pregnant for five years – and are now expecting quadruplets (Pictures: KETV)

A husband and wife who struggled with infertility for five years said: ‘We’ve hit the jackpot’ after discovering they’re expecting quadruplets. Maria Sawaged and her spouse Joseph are expecting three boys and a girl in the coming weeks after multiple previous unsuccessful rounds of fertility treatment.

Maria, from Omaha, Nebraska, said: ‘It took us almost five years to get to this point.’ Joseph added: ‘We hit the jackpot, absolutely. Now we can kind of say that we did everything that we could. And finally worked out. So now we got, we got a lot going on ahead of us.

After that, they decided to try one more intrauterine insemination (IUI) treatment. The procedure sees washed and concentrated sperm placed directly into a woman’s uterus at the same time her ovary releases and egg or eggs to be fertilized.

Maria went to her doctor’s afterwards – and returned home to an answerphone message that changed her life. Recalling the news, Joseph said: ‘(Maria) came over to me, she says like, “Don’t be scared or like don’t be frightened of what you hear.”

‘So I was like, “Oh this is gonna be bad news.” So she does the recording and the doctor saying, doctor said the same thing, “Don’t be worried. Don’t be concerned. But you have four,” and I was like, what?!’

Maria added: ‘It’s exciting but nerve-wracking. Coming from having no babies at all, and now we’re about to have four.’

The couple will welcome …read more

A New York dental startup had to close for 3 months and lost 15% of its business last year. It just got $125 million to fuel its comeback.