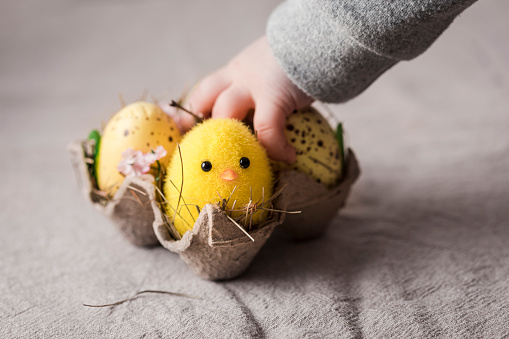 Easter is a time for new life and new beginnings. (Picture: Getty)

Yesterday was perhaps the biggest day in the Christian calendar, when churchgoers celebrate Jesus Christ’s resurrection.

Easter Sunday is the day when Jesus emerged from the tomb after his crucifixion, proving (for Christians) there is life beyond death.

But the day afterwards is not celebrated as a public holiday everywhere, although it is in the UK.

What is Easter Monday all about?

It has religious significance, because it is the day after Christians believe the messiah returned to earth.

Jesus is believed to have stayed for 40 days, appearing to believers and giving ministry.

On Easter Sunday, Jesus’ tomb was found empty, prompting believers to declare that He has risen. (Picture: Getty)

He healed the sick and proved to doubters that he was the son of god.

This is what helped to establish the church, it is believed.

Christians believe he ascended to heaven after the 40 days.

Why do we have Easter Eggs?

Firstly, if you have any left, then good for you with your willpower.

Eggs symbolise new life, as Jesus began his new life after his resurrection on Easter Sunday, and cracked eggs are symbolic of an empty tomb.

Eating eggs was forbidden during the Holy Week and many traditionally gave them up for the whole of Lent (that’s why we have Pancake Day to use them up), so eating sweet treats is a way of breaking the fast.

It wasn’t until the 19th century that the first chocolate eggs appeared in France and Germany, and this tradition has now carried on.

How do people celebrate?

The 5 best Lightning cables for iPhone and iPad in 2021